Earth realized that it was by nature alien and unlike to heaven, and so it fled from heaven to the lowest place. And that is why the earth remains motionless, so as not to approach near to heaven. And the celestial nature grew aware that the earth had fled and occupied the lowest place, and that is how the heavens came to empty themselves out in fruitful fashion over the earth. – Meister Eckhart, Sermon Sixty

The human race did not evolve on its own.  It is the product of genetic engineering carried out by highly advanced entities that have existed for billions of years.  432,000 years ago, entities from the Sirian civilization arrived on Earth and began to accelerate the evolution of primates.  Over the following millenia, other civilizations brought humans to Earth and experimented with various combinations of DNA.  All of this took place with a high degree of coordination, the goal being a unique race—Terran—through which souls could evolve.

In 32,400 B.C., twenty-four civilizations arrived in Earth’s orbit.  They took genetic material from some of the tribes they found, combined it with extraterrestrial DNA, and founded civilizations on Earth with distinct cultures.  This was the beginning of advanced cultures on Earth.

Despite these auspicious beginnings, by the second half of the 20th century, the human race was nearly enslaved. The ruling class had sold humanity to reptilian and grey aliens as if they were livestock.  These villains, the Illuminati families, were themselves half-reptilian.  They carried out Satanic rituals and drank human blood to control their shapeshifting.

Beneath the Illuminati families there was another group called the Committee of 300.  These families could have up to fifty percent lizard DNA, and many were proud of being able to shapeshift. (https://www.bibliotecapleyades.net/sociopolitica/esp_sociopol_bush59_05.htm)

Prescott Bush with the Masonic Skull and Bones.

Prescott Bush and George HW Bush loved the Nazis and hated the USSR. 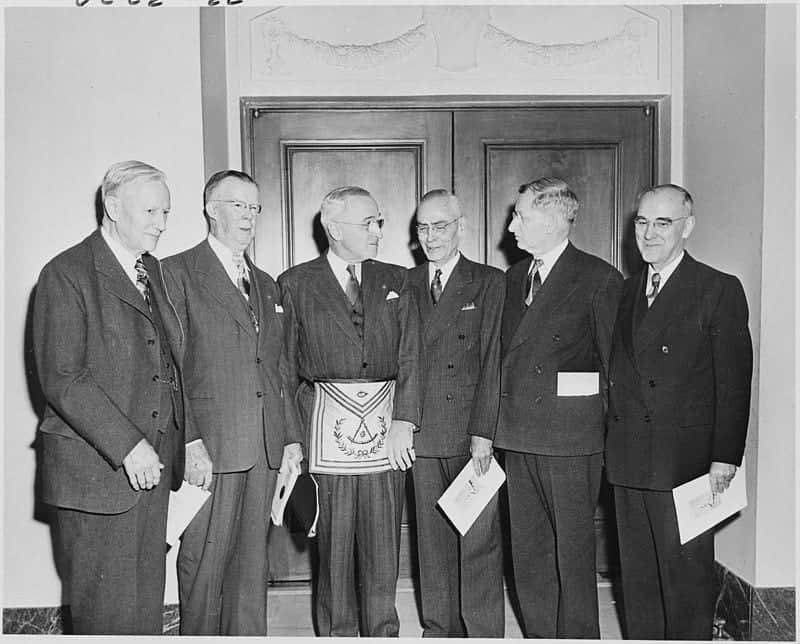 During World War II, the Illuminati-controlled German government made a pact with grey extraterrestrials: the aliens would be provided with humans to experiment on, and the government would receive advanced technology.  A Nazi base was built underneath Antartica, and another beneath Australia.

When Franklin Roosevelt died in 1945, the Illuminati  seized control of the U.S. government through Vice President Harry Truman, a Freemason.  In 1954, greys began to produce grey-human hybrids in underground military bases.  The goal was to replace the human race.  (See The Great Replacement)

The future looked bleak for humanity, but all was not lost. Beings from many different star systems, galaxies and dimensions came to the rescue. The Galactic Federation of Worlds, being the closest to Earth, have been helping Terrans on the military and technological front to fight six predatory ETs known as the Nebu.  Extremely advanced entities known as The Council of Nine and The Council of Five have been working on the spiritual front, helping Terrans to raise their vibrational frequency to a higher level.  In addition, since the end of WWII, millions of souls volunteered to incarnate on Earth, like a heavenly Abraham Lincoln Brigade.  The volunteers call themselves star seeds.

Questioner:  How many of them are incarnate on Earth now?

Ra:  I am Ra. The number is approximate due to an heavy influx of those birthed at this time due to an intensive need to lighten the planetary vibration and thus aid in harvest.  The number approaches sixty-five million.

Questioner:  Are most of these from the fourth density?  What density do they come from?

Ra:  I am Ra.  Few there are of fourth density.  The largest number of [volunteers] are of the sixth density.  The desire to serve must be towards a great deal of purity of mind and what you may call foolhardiness or bravery.  The challenge/danger of the [volunteer] is that it will forget its mission, become karmically involved, and thus be swept into the maelstrom into which it has incarnated [and contribute to] the destruction. – The Law of One  (January 28, 1981)

In 2021 Alex Collier, a contactee of the Andromeda Council, placed the number of volunteers on Earth at 200 million.

The Return of The Seeders

In October of 2021, a massive fleet of ships arrived in the solar system and docked near Jupiter’s moon, Ganymede.  This fleet accompanied the return of a group that is sometimes called the Intergalactic Federation, and sometimes the seeders.1

This is what Commander Val Nek, of the Galactic Federation of Worlds, said about the seeders on October 15, 2021:

You see, these beings, the consciousness if you will, that we call the Intergalactic Federation, they are responsible for seeding many different races that date far beyond the history of man.  They are the ancestors of Planet Terra and many others, and hold the consciousness of creation.  It may be helpful to think of them as energy instead of extraterrestrials or people.  Their energy holds a quantum frequency that contains the original intention of this planet and its people, when it was first created and even before it and the inhabitants were created.  (Megan Rose, 2021, p. 61)

This article is not about these momentous events, which are all described in Megan Rose’s book, Welcome to the Future.  Rather, it is about the seeders.

The most thorough description of the origins of the human race is found in Radu Cinamar’s Forgotten Genesis (2019).  What we learn from this amazing work is that there was nothing organic about humanity’s evolution.  Cinamar recounts how 432,700 years ago, beings from the Sirian civilization arrived on Earth and began to alter the DNA of primates they found on the Sinai Peninsula.  Their goal was to help them evolve into a race which could support the spiritual evolution of souls; i.e. a race of self-aware beings.  Over the following 10,000 years, they monitored their progress and continued to make subtle changes.

It was primarily the Sirian civilization which had assumed the role of “parent” in the creation of more beings in our galaxy—among them the future human beings on Earth—having collaborated in this respect with several other very advanced civilizations, among which one of the more important ones were the Arcturian.  They were considered the “doctors” of the galaxy because of their exceptional knowledge in the field of spiritual development of genes, life and evolution.

I was shown in a few pictures that the Arcturians deal in our galaxy with the state of harmony, well-being and spiritual health of many civilizations, expecially those in the early stages of evolution.  Knowing the “theme” of the genetic project on Earth, they suggested that the strain of human DNA must withstand a very high degree of complexity of genetic combinations, and also indicated the frequencies that were needed to make it happen in order to get this extraordinary versatility of the marcro-molecule of life. (Cinamar, p.152)

Although the ENK branch was mostly allowed to evolve naturally, there were occasional infusions of ET DNA, and they were also allowed to interbreed with the more evolved ENL branch.  Eventually, the ENK branches evolved into humans with genomes from twelve intergalactic species.  Moreover, they could reproduce with all of the other humans on Earth.

With regard to the E-N gene, through the subtle energetic interventions of the Neiberau ship, and the genetic ones realized by Tenekau (Enki) and the team of researchers, it gradually developed and split into two main branches: the E-N-L and the E-N-K.  They developed over time, and through diversification, each formed sub-branches.  Following the birth of Adam, the E-N-L branch became a specialized nursery for the incarnation of extraterrestrial beings who had accepted the mission to help ground the new race, while the E-N-K branch has grown more slowly and mostly naturally, with certain occasional infusions of extraterrestrial DNA, or through combinations with higher beings from the E-N-L branch. (p. 153)

Cinamar goes on to explain that around 25,000 years ago, those of the E-N-L branch ascended to a higher dimension, in what might be called a harvest.  However, teachers remained behind to pass on their knowledge to the E-N-K humans, and this brought about a leap forward in their evolution (p. 163).

The Council of Nine

When asked about the origins of the human race on Earth, the Council says that its first contact with Terrans occurred in the year 32,400 B.C., when twenty-four civilizations arrived to establish colonies.

The following exchange is between the Council of Nine and attendees at the sessions.

Q:  How was the first colonization carried out?

Q:  And where would that have been?

Tom:  At Akisu, near what you call the Tarim Basin.

Tom:  They were the ones that evolved on Earth.  They originated on Earth.

Q:  So, is it correct to say that blacks were the only race that went through a complete evolution from here?

Tom:  Yes.  The blacks were indigenous to Earth.

Q:  When the Hawk came down to Earth, at what stage were people?  Were they primitive?

Tom:  You might call them societies with a simple structure.

Q:  And then the twenty-four altered their genes?

Tom:  Yes. That was the beginning of more advanced culture on Earth.

Was Earth an intergalactic Botany Bay?

Q:  What kind of a race was there with whom to begin the bioengineering?

Tom:  The twenty-four civilizations have never mingled with the original race of Earth, which is the black race.   But other beings had been set upon Earth by other civilizations—civilizations not working directly with the twenty-four.  [These other civilizations] had transported groups of beings that were outcasts, and these evolved as human.2  It was this race which was mixed and intermingled by those who landed in 32,400 B.C.  The people were placed there.  We cannot use the word seeded because that is not the appropriate word.

Q:  Are they the results of breeding on Earth or were they brought to Earth?

Tom:  They are the result of breeding upon Planet Earth. . . . Before the time of 32,400 B.C., seeds were placed upon Earth.  By 32,400 B.C., the seed had evolved into a human being.  Then, those of the other civilizations came to this planet with a being we could call the Hawk to interbreed the seeded peoples with beings from other civilizations.  The blacks evolved from the planet. (pp. 86-87)

1. Megan Rose: The Return of the Seeders

2. See Lawrence Spencer’s Alien Interview (2010) for information about these other civilizations that transported “outcasts” to Earth.

The following chronology is from Matrix II and Forgotten Genesis. Athough there is no way to verify any of this, it provides some perspective to this discussion of mankind’s history on Earth.

432,700 years ago – Sirians begin to accelerate the evolution of primates. (Forgotten Genesis p.99)

32,400 B.C. – The twenty-four civilizations begin creating civilizations in the Tarim basin.  “Originally, in the [settlement] upon Planet Earth in Akesu, one colony went to what became Atlantis, and another was developed by Hoova, through Abraham, in Ur and Canaan.”  (The Only Planet of Choice)

26,000 years ago – Beginning of the civilization of Atlantis.

25,000 years ago – The E-N-L branch of humans ascends to a higher frequency; teachers remain on Earth to help transfer their knowledge to the E-N-K branch.  Evolutionary leap forward for indigenous humans  (Forgotten Genesis p. 163)

15,000 B.C. – Construction of the Great Pyramid of Giza is begun. “The Great Pyramid, and there were others that were of similar nature, was begun in a time before the destruction of Altea.  It was begun approximately 150 years before the destruction of Altea, 13,000 of your years ago, in the colony in which it had been begun.  Then, approximately 7,000 years ago, additions were made, and then it was completed.”  (The Only Planet of Choice)

9,000 B.C. – Additions are made to The Great Pyramid and it is completed during the reign of Pharaoh Khufu.  (The Only Planet of Choice).

6,000 B.C. – The Tower of Babel is destroyed.  “That was in Ur, after the destruction of Atlantis.  Ur was a colony from Atlantis.  Its (the tower’s) existence was within 200 years of the existence of Pharaoh Khufu.  Its destruction was 3,000 years later; yes.”  (The Only Planet of Choice)

Rose, Megan (2021). Welcome to the Future: An Alien Abduction, A Galactic War and the Birth of a New Era. (https://meganrosemedium.com/book-release/)

The Law of One.  https://www.lawofone.info