When WrestleMania was transposed onto Washington, D.C., the crowds cheered and jeered; roaring applause was met with deafening boos, but the outcome of the great match was preordained, the tumult was all for show.

Take a moment to breathe in the complexity and “intelligent” design: if the 20th Century was the Cabal gaslighting American Patriots, the last four years have been the Patriots gaslighting the Cabal. And, more importantly, like a scripted wrestling match, all the smackdowns and reversals planned out in advance to elicit gripping emotion in you, gentle reader.

Feel it all for yourself, in the audience, suffering the low blow the villain delivers to our hero; hear the echo of the ringing in his ears by a folding chair smacked to the back of the head — but then, that glorious reversal; enjoy his exhilaration when, from the third rung, a flying elbow parlays into a headlock, and he throws that villain down, finishing him off in a leg lock, and then the long count; can he maintain? Yes. For Victory is Ours.

This is the painful dance we have been watching play out since 2017, made possible by an unexpected script and the equally unexpected happenstance that nearly all of the players have fought in the same fox holes together for decades. If you just tuned in, you missed the first 30 years of what’s been going on and the half century of illegal moves that set this stage. No wonder it’s all a big surprise.

And to which family of Connecticut billionaires who stay largely offstage do we owe so much thanks to, as the technical consultants to make WrestleMania on the Potomac possible?

The Chairman himself, Vince, and Linda, who he first named Administrator of the Small Business Administration and then Chairwoman of Super PAC America First Action — the McMahons of WWE — the very best in the world at orchestrating staged battle royales.

‘I love it when it gets surreal’

Before we get to the warriors on tonight’s fight card, let’s emphasize the ethos underpinning this squared circle.

Who also understands the power of the wrestling mind is Rick Rubin, the music producer who credits Rowdy Roddy Piper and Nature Boy Ric Flair with the mentality that made the Beastie Boys — which he managed from his NYU dorm room where he co-founded Def Jam Recordings — so great.

On Showtime, Rubin produced a documentary about his Malibu Shangri-La music studio, and the most edifying episodes (watched them all on a long plane ride) were when he goes into how professional wrestling informs his work. Watch it, especially if on JetBlue.

Rubin gave a prelude to the BBC Radio 1  in a 2014 interview of the origin story of this application of wrestling to real life,.

In the late 1970s, Rubin was in a Long Island, NY, high school rock band called The Pricks. The peak of their teeny-bopper fame was that time they had a gig in Manhattan at the vaunted Country, Bluegrass and Blues, or CBGB’s to its ardent fans.

To capitalize on the notoriety of the venue, the particular aggressive branding of the band, to get some headlines, Rubin had all his high school buddies in the audience, where they staged a brawl after the second song in the set. His dad, who was an auxiliary police officer out on Long Island, was there in uniform, and his job was to make a show, pretend to get into the middle of the fight to break it up. In other words, just like wrestling matches on TV.   Or LARPs — live-action role players, to put on a show people would remember.

Rubin also gave an interview on the subject of the wrestling ethos to Rolling Stone, in 2015. Here’s his advice for the promoter of the upstart Smoky Mountain Wrestling League that he helped bankroll in 1991.

Just make the storylines more extreme; less believable and more radically offensive. I’ll say pretty much any time a man hits a woman with a chair, that’s really offensive, that gets heat. That’s really bad. Any time anyone takes advantage of anyone who can’t defend themselves, oh my God, you hate that person, and that builds that tension – you want to see the good guy conquer the bad guy, or at least you want to see how the bad guy will weasel their way out of it.

It’s about Good vs. Evil.

I just think it’s funny when somebody is acting so bad, and it’s obviously so wrong. A great example is Ric Flair; you’d see him just getting destroyed in a match, begging, really acting un-champion like, getting beaten up for 20 minutes, and then he’d hit a low-blow and steal the victory. And then they’d interview him in the back and he’d have this big smile on his face, bragging about how he destroyed the guy. It’s unbelievable. Flair’s the ultimate. He’s the greatest character, says the funniest things; he’s incredible in the ring – the idea of him giving his five best shots to his opponent, and it having no effect on them, and his reaction to that, when it hits him that he’s done his best and it has no effect, and the way he runs away and the way he gets caught. It’s funny every time it happens, and as soon as he gets the upper hand, the arrogance kicks in. Plus, his falls, the delayed reactions, he takes three-or-four steps, as if everything is fine, and then the complete face-plant, he’s like a cartoon character. It’s so surreal. I love it when it’s surreal.

When I heard him on the documentary, I was like, this is it. Here’s Rubin in the same RS interview, on what you and I would call the “mainstream media.”

I love the commentators, too. Like, we’re watching this supposed sport, and we have a commentator calling the action, but then we also have a bad-guy commentator, who’s going to comment from the heel perspective; every time the bad guy does something horrible, the bad-guy commentator defends his actions. “He’s cheating!” “No, it’s gamesmanship!” It’s so funny. I don’t watch any other sports, because they’re never as entertaining – you can’t watch a baseball game and have the same emotional rollercoaster ride that you can watching pro wrestling. It’s not possible.

Ok, so that’s the gist; it’s the rollercoaster that makes you tune in. And the job of the promoter is to engineer the opposing forces to keep you in your seat.

(We’re featuring Jesse ‘The Body’ Ventura, a member of the U.S. Navy Underwater Demolition Team during the Vietnam War, professional wrestler, wrestling commentator, Mayor of Brooklyn Park, MN, and Governor of Minnesota, because he also hosted TV show Conspiracy Theory with Jesse Ventura on TruTV because, you can see, this man has been trying to tell us the real story the whole time.)

But beside the stars and the commentators, who really creates all the magic here are the WWE writers.

Indeed, did you realize that this odd Americana programming is the longest running weekly episodic television show in history?

If you read the job add for the vaunted role of WWE writer, responsible for 52 weeks of original programming combining action, adventure, comedy, horror, drama and reality, the tricks we’re talking about all there?

A few of the Key Responsibilities:

It’s all about the storylines and understanding the audience, scripting the excitement for them to fall in love with what you are offering!

The Battle of the Billionaires

Trump hosted WrestleMania IV, in 1988, at his casino in Atlantic City. What’s not to love, he must have thought. All this spectacle, all those butts in seats, surely many made their way to slot machines next. The top card was the rematch of Hulk Hogan vs. Andre the Giant with Bobby “The Brain” Heenan, “Million Dollar Man” Ted DiBiase and Virgil, and rather than a victor, it ended with the double disqualification, leaving the door open, of course, for more rematches! 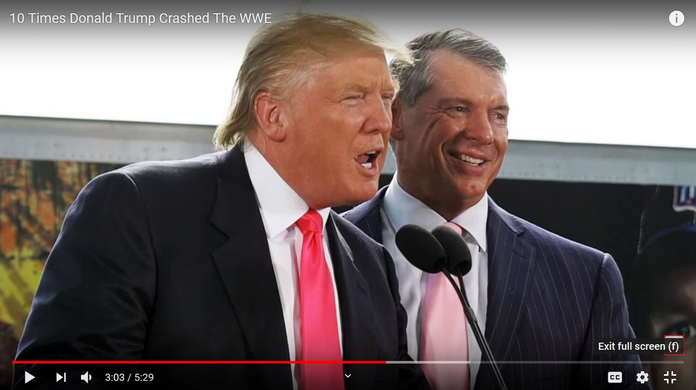 Trump’s friendship with Vince McMahon, now an Economic Advisor to the President, became legendary. McMahon’s father was a New Yorker, from Harlem, who also understood the power of spectacle, building a wrestling league that would transcend the regional roots of the sport in small arenas to build a super league to fill Madison Square Garden and get onto national television, and all of it still closely held by the family members who ran the operations. Where the dad was purely off-stage, the younger McMahon’s vision was to enter the storyline, bulk up to be an equal of the super-sized men and women he featured in the show, to ultimately become a character called The Chairman. And of course he was friends with The Donald.

I wonder over what lunch at the Plaza they hatched the next plan, 2013’s WrestleMania 23, Battle of the Billionaires? The idea was each would appoint a wrestler to battle it out on their behalf, the loser would have his head shaved after the match. Of course, the two six-foot-plus executives end up trading choreographed blows, too.

From the Squared Circle to the Satanic Swamp

So let’s leave the televised squared circle and head to that haunted pentagram, the Satanic Swamp.

Here we have McMahon’s lifelong chum and mentee, even, The Donald, playing to both the fan audience that sees him as the hero and the other half of the country who sees him as the “heel.”

These narratives match up so nicely — the outsider groomed for this denouement of the deep state his whole life, or the interloper who panders to his base by not sticking to the form, although he hits the nail on the hand in the function — this man just isn’t presidential they scream!

There’s not that nuanced debate from before — this man is the president and I just disagree with that policy or that decision — it’s this man does the Lord’s work or he is Satan incarnate.

On one level, you could say it is the two understandings of POTUS battling it out, as the rest of the villains aren’t even up to the task. I can’t wait for the three presidential debates, but I’m certain Biden, if he even makes it, wouldn’t even be worth the pay-per-view.

But, as everyone’s favorite back-channel voice says, “What makes a great movie are great actors.” It’s the secondary players (or second bananas, in show biz vernacular) on the stage who really give the star something to work with.

At the core of “Sting 1” was civilian Trump’s work as the bait and informant for the FBI against the Atlantic City mafia, in the late 1970s, and New York’s cement mafia, in the 1980s, and his brother Robert’s role in trying to pin Hillary Clinton and her law firm to the BCCI money-laundering, weapons smuggling fraud via the BNL cutout that was fingered for disguising weapons to Iraq as “agricultural exports,” at the start of the 1990s. (What a sentence!!!!)

The takeaway, really, was that the same department of justice lawyers in New York and Washington in the 1980s who knew of Trump’s secret role were the very same supposedly on top of stopping him today. It just doesn’t jibe.

When you run through the details of who’s who today and who was who back then, it’s clear that the Sting is as elaborate, distracting, infuriating and an ingenious Plan, as was the enmity between Hulk Hogan and Andre the Giant or the Iron Sheikh, or in this case. POTUS and the forever Deep State DOJ. The conclusion will be that all the big players are all on the same side, and the show has been for entertainment and educational purposes only.

Patriots wanted to do the right thing, but their Cabal bosses wouldn’t let them; given the chance today, watch them right the good ship Justice.