Note: As of this post (2019) there is a living saint named Prahlad Jani (born 13 August 1929), an Indian “breathless” monk who has lived without food or drink since 1940  — nearly 80 years. “Breathlessness” is literal: yogis stop breathing while in a trance. Swami Trailanga (1607-1887), who seldom ate but weighed 300 pounds, was known to meditate for days floating on the surface of the Ganges and for long periods underwater (Yogananda, p. 455).

Recounting of Paramahansa Yogananda’s meeting with a saint named Giri Bala, taken from Autobiography of a Yogi, 1946. 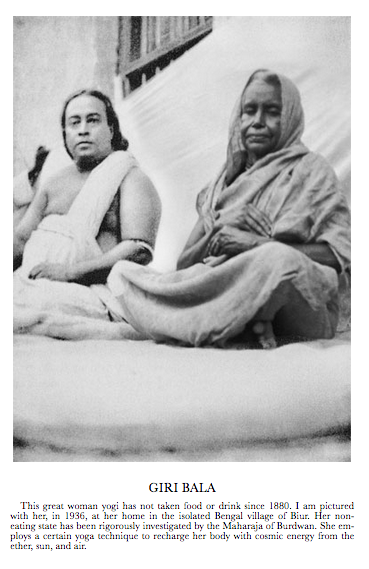 In order to locate Giri Bala, Yogananda first visited her brother, Lambadar Babu, a lawyer living in the city of Purulia.

“Please tell me, sir, if it is absolutely true that she eats nothing?”

“It is true. In more than five decades I have never seen her eat a morsel. If the world suddenly came to an end, I could not be more astonished than by the sight of my sister’s taking food!”

“Giri Bala has never sought an inaccessible solitude for her yoga practices,” Lambadar Babu went on. “She has lived her entire life surrounded by her family and friends. They are all well accustomed now to her strange state, not one of them who would not be stupefied if Giri Bala suddenly decided to eat anything! Sister is naturally retiring, as befits a Hindu widow, but our little circle in Purulia and In Biur all know that she is literally an exceptional woman.”

Yogananda’s party then drove their automobile to Biur, a “minute village in the interior of Bankura District” finally arriving at 5:00 the same day, May 5, 1936. A group of young men helped to get the automobile moving as it got stuck several times, and they arrived at the saint’s house with a crowd of villagers, who stayed to witness the meeting.

Yogananda described Giri Bala as a tiny woman; however she was not emaciated: “Her olive-colored skin had remained clear and healthy in tone.”

She spread her hands in a gracious gesture. “I am glad to reply, insofar as an insignificant person like myself can give satisfactory answers.”

“Oh, no, not insignificant!” I protested. You are a great soul.” [Yogananda missed an essential point here: that the soul must become insignificant in order to become one with God, as a being can’t be both a self and God at the same time.]

“I am the humble servant of all.” She added quaintly, “I love to cook and feed people.”

A strange pastime, I thought, for a non-eating saint!

“Tell me, Mother, from your own lips — do you live without food?”

“That is true.” She was silent for a few moments; her next remark showed that she had been struggling with mental arithmetic. “From the age of twelve years four months down to my present age of sixty-eight — a period of over fifty-six years — I have not eaten food or taken liquids.”

“Are you never tempted to eat?”

“If I felt a craving for food, I would have to eat.”

“But you do eat something!”

“Of course!” She smiled in swift understanding.

“Your nourishment derives from the finer energies of the air and sunlight, and from the cosmic power which recharges your body . . .” [More accurately, the body is only a real-seeming figment sustained by the mind.]

Mother, please tell me about your early life.”

Giri Bala put aside her habitual reserve, relaxing into a conversational mood.

“So be it. I was born in these forest regions. My childhood was unremarkable save that I was possessed by an insatiable appetite. I had been betrothed in early years.

“‘Child,’ my mother often warned me, ’try to control your greed. When the time comes for you to live among strangers in your husband’s family, what will they think of you if your days are spent in nothing but eating?’

“The calamity she had foreseen came to pass. I was only twelve when I joined my husband’s people in Nawabganj. My mother-in-law shamed me morning, noon, and night about my gluttonous habits. Her scoldings were a blessing in disguise, however; they roused my dormant spiritual tendencies. One morning her ridicule was merciless.

“I shall soon prove to you,’ I said, stung to the quick, ‘that I shall never touch food again as long as I live.’

“My mother-in-law laughed in derision. ’So! she said, ‘how can you live without eating when you cannot live without overeating?’

“This remark was unanswerable! Yet an iron resolution bolstered my spirit. In a secluded spot I sought my Heavenly Father.

“‘Lord,’ I prayed incessantly, ‘please send me a guru, one who can teach me to live by Thy light and not by food.’

“A divine ecstasy fell over me. Led by a beatific spell, I set out for the Nawabganj bathing-place on the Ganges. On the way I encountered the priest of my husband’s family.

“‘Venerable sir,’ I said trustingly, ‘kindly tell me how to live without eating.’

“He stared at me without reply. Finally he spoke in a consoling manner. ‘Child,’ he said, ‘come to the temple this evening; I will conduct a special Vedic ceremony for you.’

“This vague answer was not the one I was seeking; I continued toward the bathing-place. The morning sun pierced the waters; I purified myself in the Ganges, as though for a sacred initiation. As I left the river bank, my wet cloth around me, in the broad glare of day my master materialized himself before me!

“‘Dear little one,’ he said in a voice of loving compassion, ‘I am the guru sent here by God to fulfill your urgent prayer. He was deeply touched by its very unusual nature! From today you shall live by the astral light, your bodily atoms fed from the infinite current.’”

The saint resumed the talk, her gentle voice barely audible. “The bathing-place was deserted, but my guru cast round us an aura of guarding light, so that no stray bathers should disturb us. He initiated me into a kria technique which frees the body from dependence on the gross food of mortals. The technique includes the use of a certain mantra, and a breathing exercise more difficult than the average person could perform. No medicine or magic is involved; nothing beyond the kria.”

I questioned Giri Bala on many matters which I thought would be of interest to the world. She gave me, bit by bit, the following information:

“I have never had any children; many years ago I became a widow. I sleep very little, as sleep and waking are the same to me. I meditate at night, attending to my domestic duties in the daytime. I slightly feel the change in climate from season to season. I have never been sick or experienced any disease. I feel only slight pain when accidentally injured. I have no bodily excretions. I can control my heart and breathing. I often see my guru as well as other great souls, in vision.”

“Mother,” I asked, “why don’t you teach others the method of living without food?”

My ambitious hopes for the world’s starving millions were nipped in the bud.

“No.” She shook her head. “I was strictly commanded by my guru not to divulge the secret. It is not his wish to tamper with God’s drama of creation. The farmers would not thank me if I taught many people to live without eating! The luscious fruits would lie uselessly on the ground. It appears that misery, starvation, and disease are whips of our karma which ultimately drive us to seek the true meaning of life.”

“Mother,” I said, “what is the use of your having been singled out to live without eating?”

“To prove that man is Spirit.” Her face lit with wisdom. “To demonstrate that by divine advancement he can gradually learn to live by the Eternal Light and not by food.”

The saint sank into a deep meditative state. Her gaze was directed inward; the gentle depths of her eyes became expressionless. She gave a certain sigh, the prelude to the ecstatic breathless trance. For a time she had fled to the questionless realm, the heaven of inner joy.

One thought on “The Woman Yogi Who Never Eats”